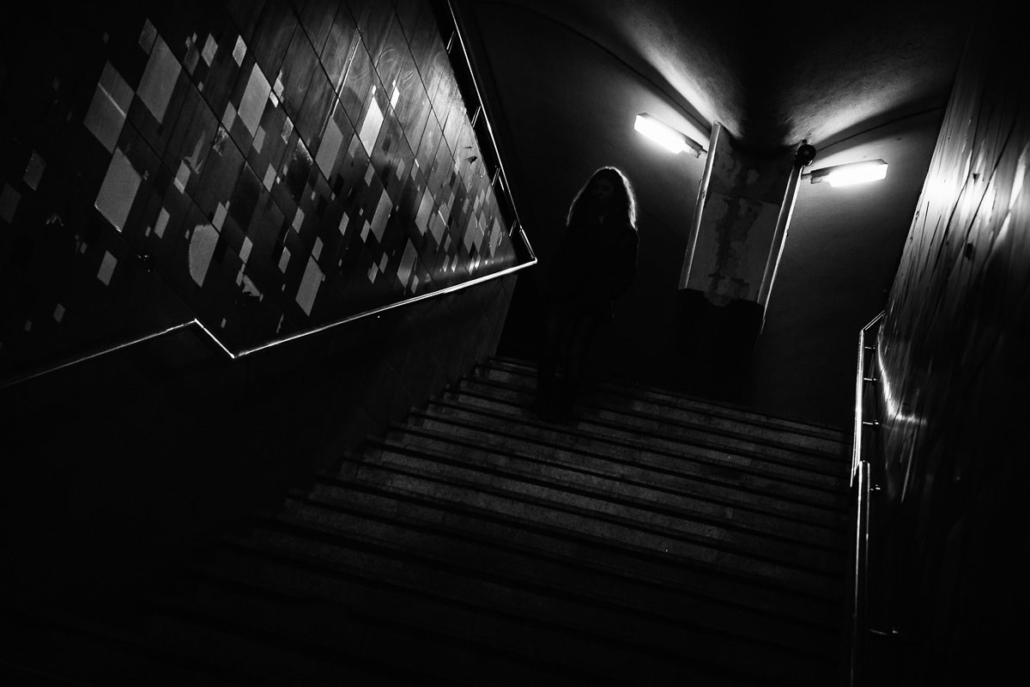 Another night at my favourite train station. This time I let the station’s dock in peace for a dive in its underground passages. It’s a good spot to get some low angles shots, with people going down the stairs.

I really like this photo. The light from the dock creates a great backlighting effect, anonymising the subject, making her almost disappearing in the shadows if the stairs if it wasn’t for the glow of her hairs. She almost seems… unreal. 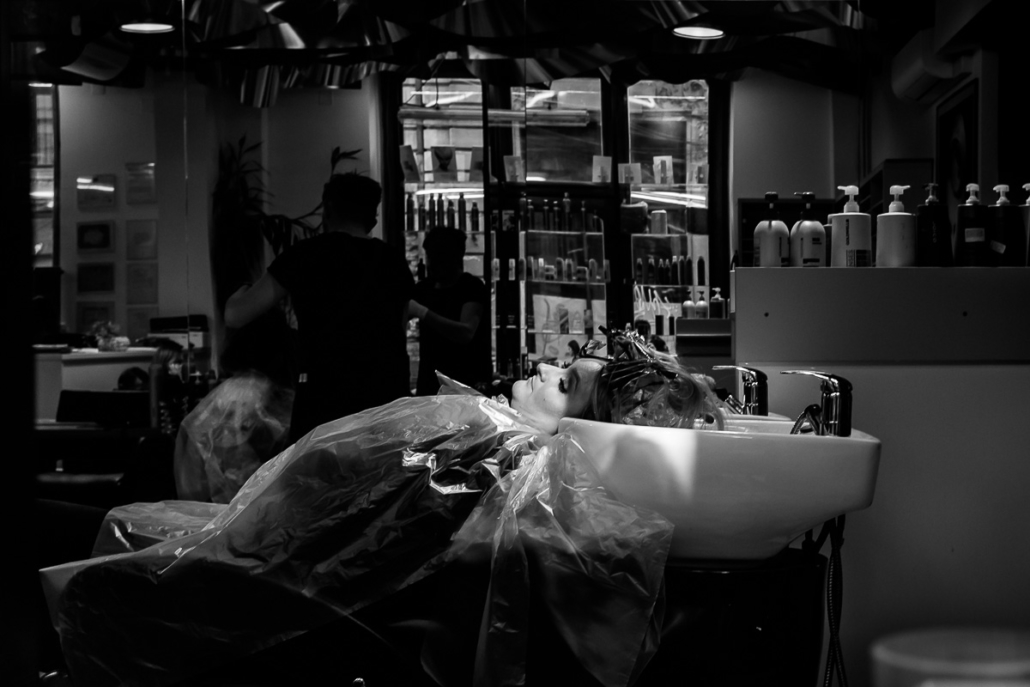 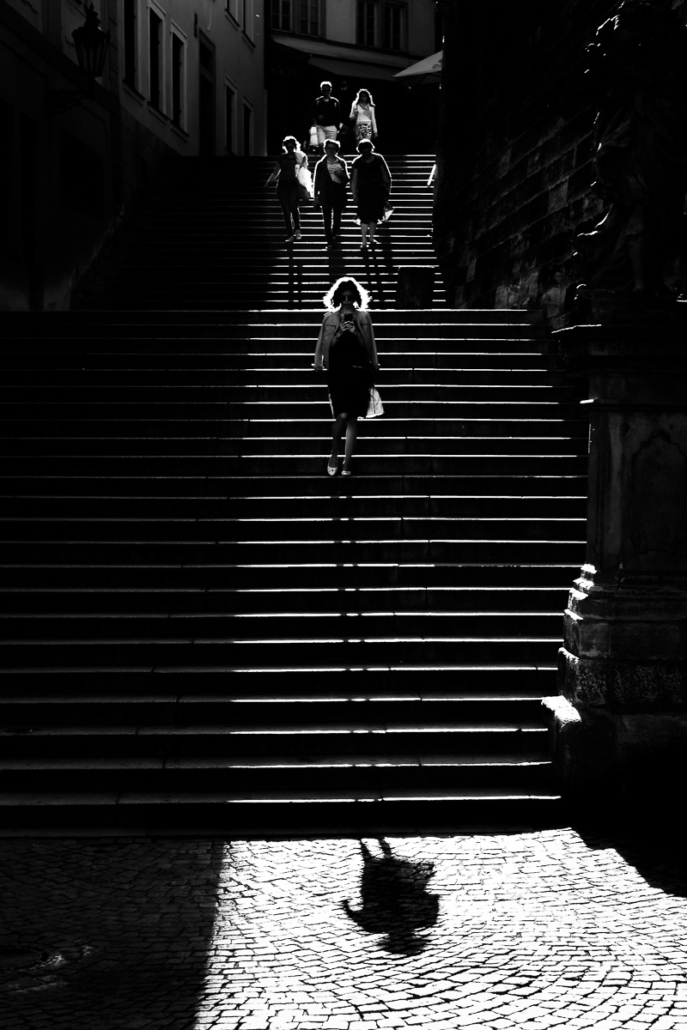 Prague has been a long time travel destination. It has this beautiful architecture, those small streets, and all those tourists that make it perfect for street photography.

This photo was taken next to Prague’s castle, in the Little Quarter (Malá Strana for those who speak Jan Saudek‘s language). Just after going down the exit of the castle on the right, there is this street, with an incredible view of the whole city. But at the end of this street, there is these long stairs, leading to restaurants and bars hidden in nice old houses. But when you’re lucky enough to have the sun just in line with these stairs, it’s a festival of incredible shadows.

I had to wait quite a lot to get this photo. There are a lots of tourists, everywhere. It’s a real challenge to get a clean shot there! And don’t even get me started about the Charles Bridge! I wanted someone alone, just one single person going down these stairs, but it was too much to ask I think. I still managed to shoot this woman, with the longest legs in the world… according to her shadow at least! I also love the way the sun shines through her hair, like a bowl of fire above her neck. It’s definitely one of my best shots of this trip!

I also have a few more photos from Prague, I think I make some new entries in my portfolio in the next weeks. And a few other trips in the most iconic places in France are also planned for this summer, so stay tuned! 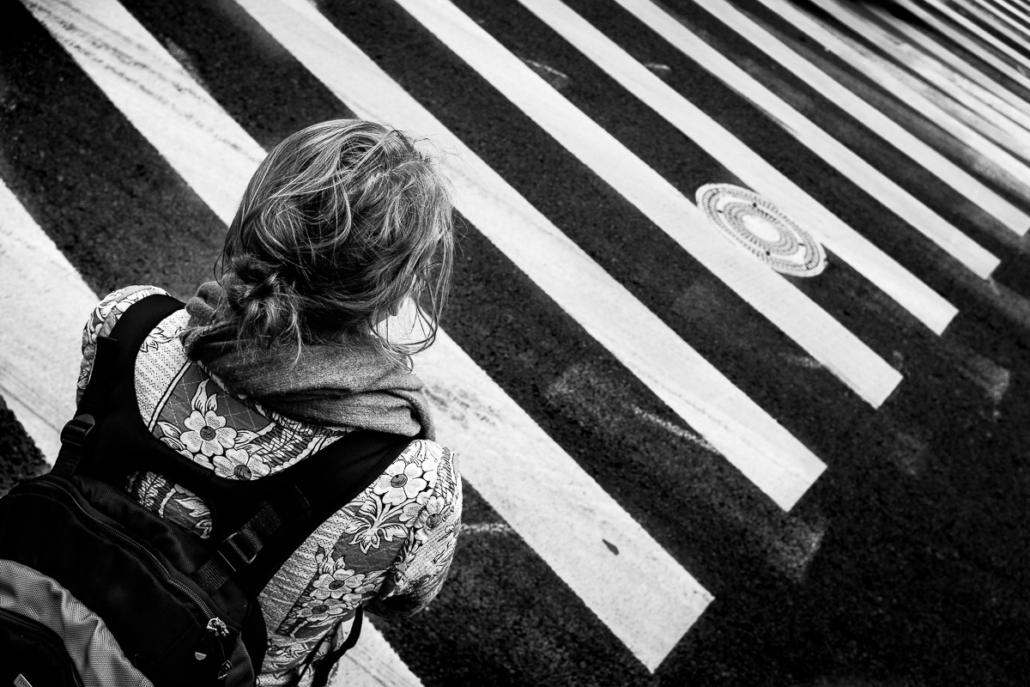 I called this photo “Dutch angle” as a reference to the famous camera tilt technique of “[setting the camera] at an angle on its roll axis so that the shot is composed with vertical lines at an angle to the side of the frame, or so that the horizon line of the shot is not parallel with the bottom of the camera frame”. This is typically the kind of composition I enjoy. I love to play with lines and stripes and tilting the camera in a way that the cross walk stripes are now going diagonal make this photo so dynamic! This combination of now diagonal lines, in two directions, makes a perfect graphical background for street photography.

I shot this dutch angle photo during a street photography workshop part of the Photo Romania Festival 2016 in Cluj-Napoca. It’s was the very first shot of the day, taken just before another picture that I’ve already blogged about. We were in a zone were road works has just been finished and those freshly painted stripes were just… tempting me, inviting me to do something graphical with them. How to refuse this invite? I’m happy this girl with her flowery coat just stepped in the frame, waiting for the green light to pop in. She was a perfect subject for this photo. The only challenge were the cars passing just in front of us, finding the exact timing was not easy but in the end, we did it!

The processing was fairly straightforward using Adobe Lightroom to turn the photo in black and white with Fujifilm‘s camera profiles. I just needed to raise the contrast between the asphalt and the white painted stripes, and voila!