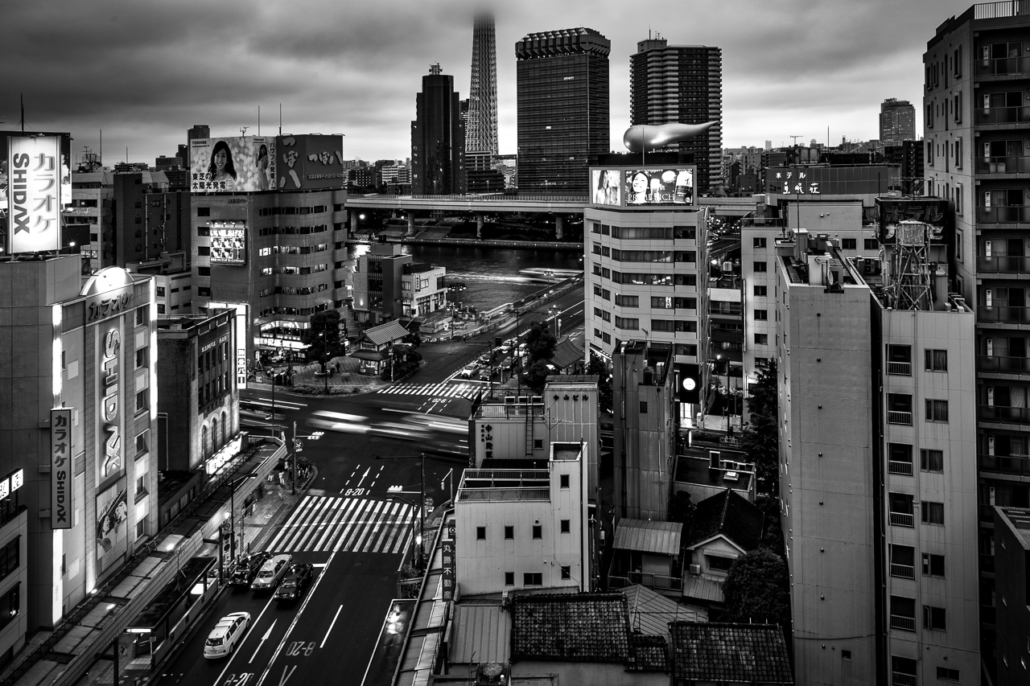 I don’t define myself as a pure street photographer, but rather as an urban photographer. The motive is simple: I enjoy capturing the city above all, not necessarily the city’s people. Combined with my passion for travels, mixed together, it results to a lot of cityscapes that not only shows the city, but also the interaction with the people there. I don’t want to just see the buildings, I want to see the traffic, the way people behave in the city.

This shot was taken very close the the Senso-Ji buddhist temple in the Asakusa district in Tokyo’s Taito ward. There is a tourist information spot at the ground floor opened until late in the evening. There, a lift can take you to the 8th floor and let you enjoy the view over one of Tokyo’s most famous temples, as well as on the Sky Tree. Unfortunately, it was quite a cloudy day and the Sky Tree, here in the middle of the photo, was hidden by this very dense sea of clouds. That’s also why we never reached the top of the Sky Tree during our trip… Nevermind, it’s now on the list for the next visit!

I like this photo because it represents quite well what Tokyo looks like. Big, small buildings, one over the other, with almost no space to breath. It is one of the very first prints I’ve ever done for myself… and it now stands in my living room!

Do you like this photo? Click here and get an original, signed print in limited edition! A color edition exists too, don’t hesitate to contact me for more information and a quotation. 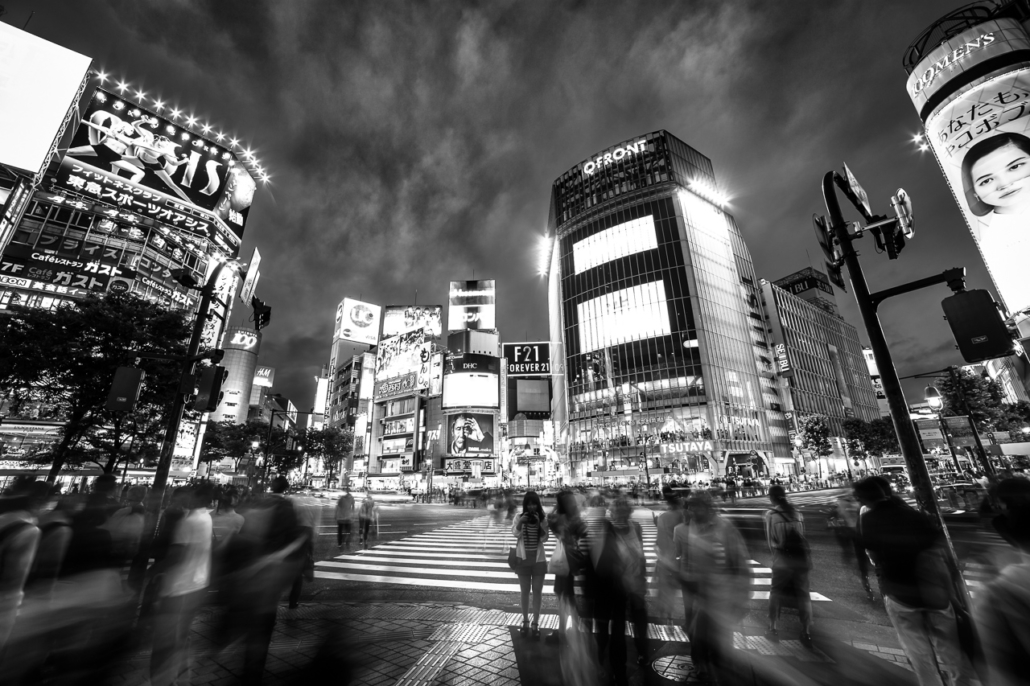 While in Tokyo, Shibuya and its well known crosswalk was a mandatory stop for me. As everyone travelling in Japan I think 🙂 It’s is such an incredible atmosphere: while everything and everyone is very, VERY quiet, you find yourself in a place where tens of ads broadcasted on tens of huge screens shout at you at an incredibly high volume. It’s pretty dazzling at first! Then you get used to it and enjoy an incredible place with a moving crowd and, in my case, a sunset like I’ve rarely seen before.

I had to use my tripod for this kind of longer exposure shot, so that I can get the people’s movement. Thanks to everyone that managed to avoid me, this damn gaijin blocking the way! It really reflects the respect oriented mentality of Japanese people, I’m pretty sure I would have not been able to do the same shot here in Europe.

I used Macphun Tonality CK for turning this photo in Black and White. That’s an amazing software that I will write more about further on. 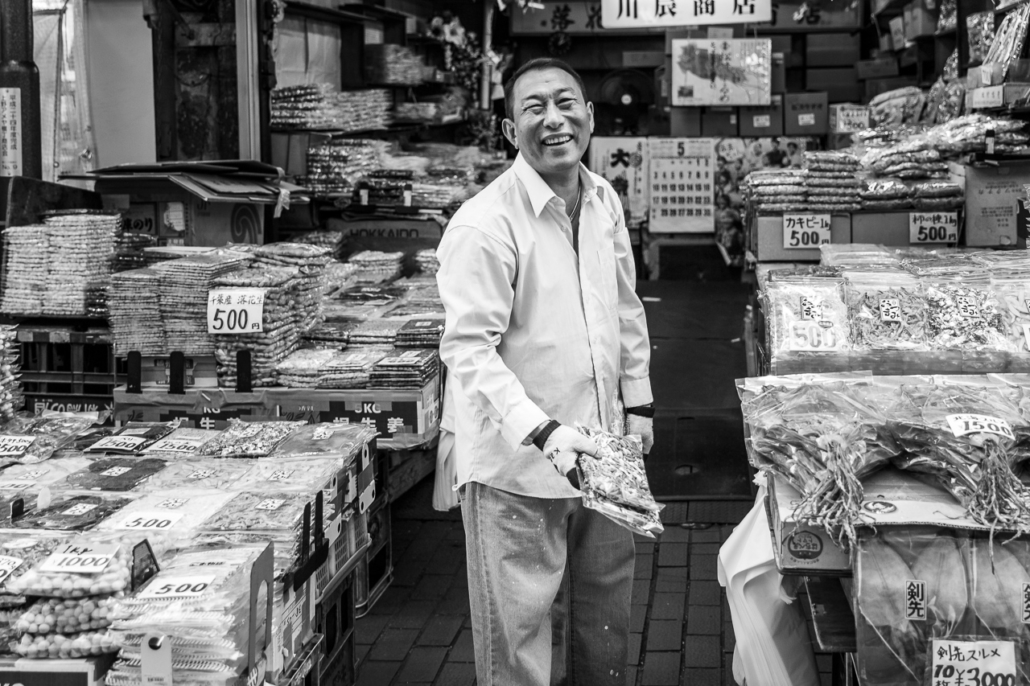 The Ameyoko shopping street was definitely one of the best moments of our visit in Tokyo. For a street photographer, this is just heaven: full of people, from the business man to the craziest fellows, full of strange, tiny places, crammed with lots of good of different kinds, all of that just under the Yamanote train line going to the Tokyo Station. It really is an incredible place, if you like street photography you could stay there for days and do not get bored even one second.

Ameyoko, or Ameya-Yokochō in its full name, is situated in the Taito ward in Tokyo, Japan, just next to the Ueno station. Its name comes from the fact that after World War II the shops here used to sell US army goods (hence the “Ame” from America in Ameyoko). This photo represent the owner of one of the almost 200 shops in the street, that really enjoyed to be photographed.

This photo was process in Adobe Lightroom, with a bit of work with dodge and burn in order to give a more 3D feel.

So, ready for your trip in Japan? You can’t wait to live Tokyo’s eccentricity, feel the zen of Kyoto’s temple, enjoy the incredible Kanazawa gardens, understand Hiroshima’s tragic destiny? And, as the photographer as you are, take some great shots? Here is my feedback on my trip to Japan… photography wise. 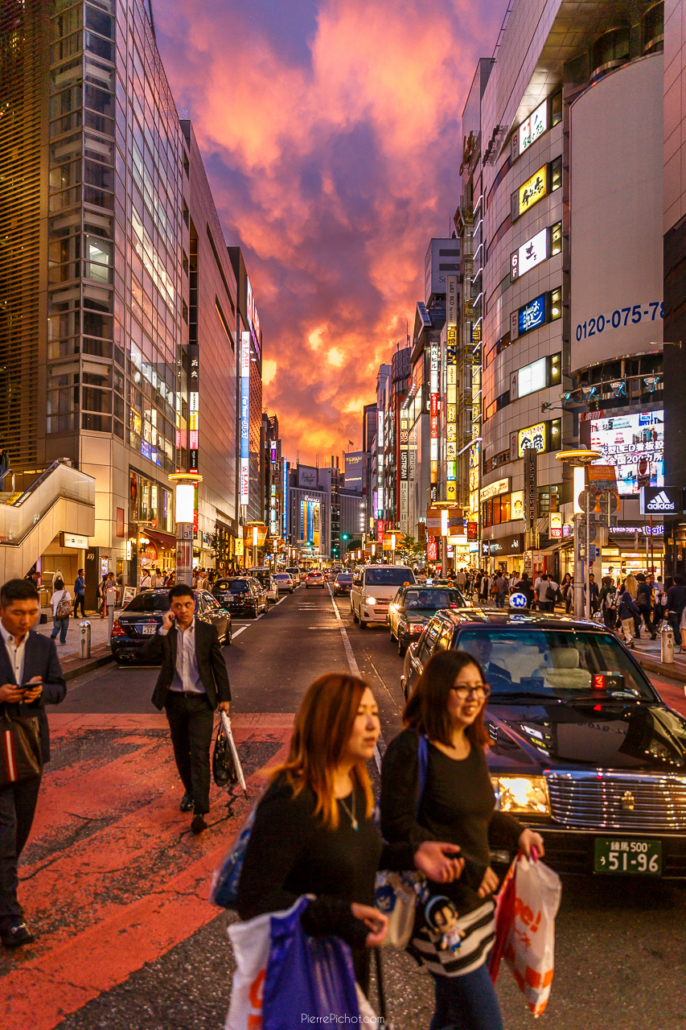 Shibuya crossing during a crazy sunset.

What gear do I need?

Of course it depends on your objectives, but let’s say your trip will focus on the 2 main destinations, Tokyo and Kyoto. In this case, go wide! In Tokyo, the incredible street lights are such a pleasure to capture, filling the whole frame. But the buildings are quite high and the streets not that large, so if you want to capture everything, you’ll have to go wide. In Kyoto, shooting temple (when possible… I’ll come back to that later on) is also a challenge, and a wide angle lens is a must. I would say that a 16-35 lens will be your best friend in a lot of occasions. Try to have a lens with little distortion in order to avoid “round buildings”, and too much work in post processing. Next to the wide angle lens, a short telephoto such as a 85mm with a large aperture is a good choice for portraiture.
A lot of temple also have some crazy beautiful gardens, once again a wider lens should help. If you’re a macro fan, that should be your field.
During my trip I took another approach with my 24-70 zoom and a 14mm prime. It was a nice combo but I regretted quite often not being able to go in the 20mm zone: 14mm was too wide (and too distorted unfortunately) while 24mm was a bit too long, forcing me to make 2 frames panoramas. However it gave me enough versatility for shooting portraits too.
In any case, go light! Some places are very crowdy and having a full backpack all day will be a pain. Trust me on this one 🙂 Set up a 2 lens combo with your camera and stick with it. Owners of mirrorless cameras will enjoy their choice, DLSR users like me will start to think about getting one!

Shooting in the streets is easy in Tokyo, as the streets are quite crowdy, you won’t get noticed easily. I’ve had all kinds of experiences with the people’s reaction on being shot: in Harajuku quite a lot of cosplayers refused to get shot at all, while during Hiroshima’s yukata festival the people was much more open in having their picture taken. It was a bit paradoxal for me as cosplayers dress like they do for being seen… so in this case, discretion is required if you want to shoot them.
However in the Tsukiji market in Tokyo, the fishermen’s reaction at having their portrait done was quite interesting, they really liked it.
In Kyoto you may cross geishas in Gion or Ponto-cho, but they don’t really like photographers.
So in the end, I would recommend to keep a discreet approach while shooting people in the streets, globally I’ve had much better reactions in other countries.

You’ve arrived in Kyoto and already selected a few of the 1600 temples in the city? Good! Be prepare to shoot them… from the outside. A very large majority of temple forbid to have photos taken within the temple’s wall, even when there is no religious rituals in progress. A bit frustrating as some of them are really beautiful, but try to respect this requirement.
However a lot of temples have some magnificent gardens and parks, with ponds, fishes (the famous Koi carps), moss, bamboos… They are a distinct part of the temples are really are a must see. I think we spent more time in the temples’ gardens than in the temples themselves 🙂 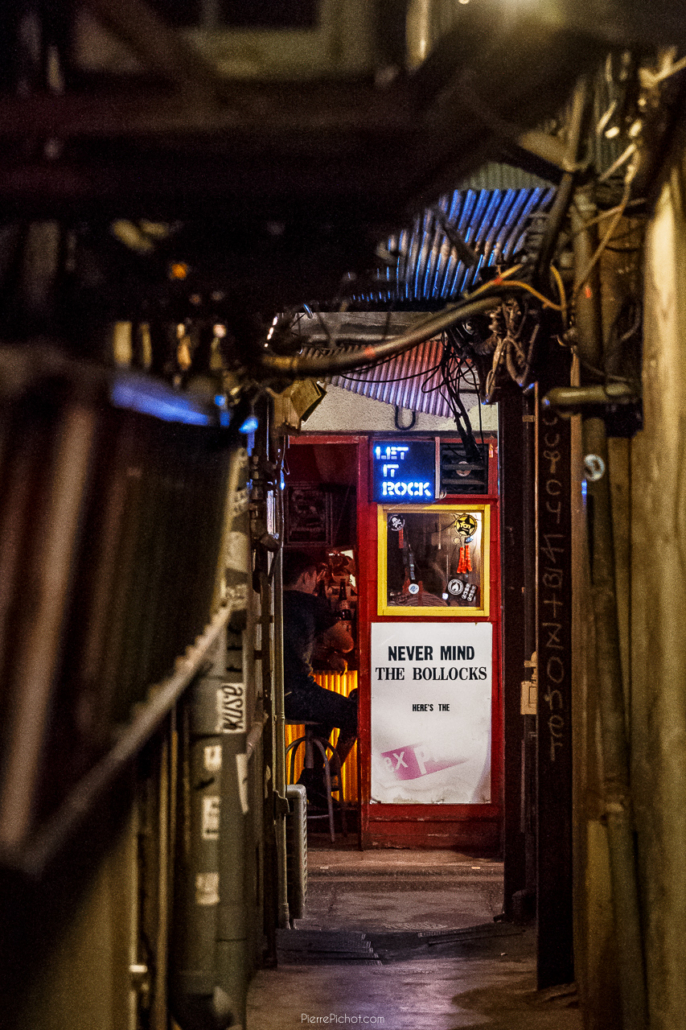 Your tripod is your best friend

Tokyo’s street life and lights are wonderful at night. Having a tripod for long exposures is pretty awesome! Some temples such as the Menji-jingu are illuminated by night. You can also give a shot at some cityscapes.
As I recommended before, avoid big, heavy gear. I’ve taken with me a Gitzo Traveller carbon tripod that is light, small and sturdy enough for my gear (in this case, Canon 6D and Canon 24-70II or Samyang 14mm). I wouldn’t have taken with me a standard, long tripod in aluminium, which would have been a pain to carry for only a few shots. Only a few shots because… 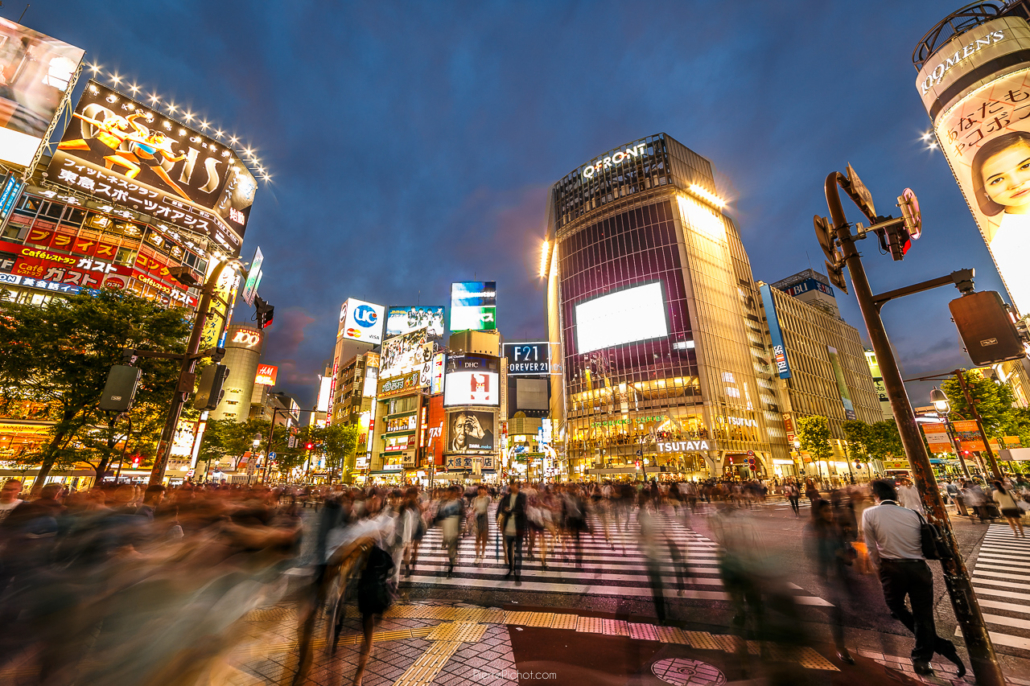 Your tripod is your worst enemy

In a lot of places tripods are forbidden. Inclusive at a very large majority on sky decks and panoramic views in Tokyo! Which are anyhow closed by glass 🙁 Same thing in the most visited temples of Kyoto such as the Kiyomizu-dera, where long exposure shots would have been awesome.
I really recommend to check on internet before you go to some place if tripods are allowed, you’ll avoid carrying your tripod for nothing all day long, in crowdy public transport…

Before going somewhere, document yourself about the best spots to shoot it. A bunch of great website exist (Shoot Tokyo is the first one popping in my mind, with a list of Tokyo’s best spots), next to the usual ones (Flickr, 500px) that will help you find the place to take your photos. Just going there and see onsite will usually result in frustration. Check also if tripods, or photography in general, is allowed.
Take also in account that you will usually not be alone, and not with photographers. It’s tempting to wait for that cloud to come in the frame or that ray of light to hit that window, but your travel companions will not have the same patience. Plan your shots, take them, and continue your tour without losing too much time, it will avoid unpleasant situations (ask my wife!). 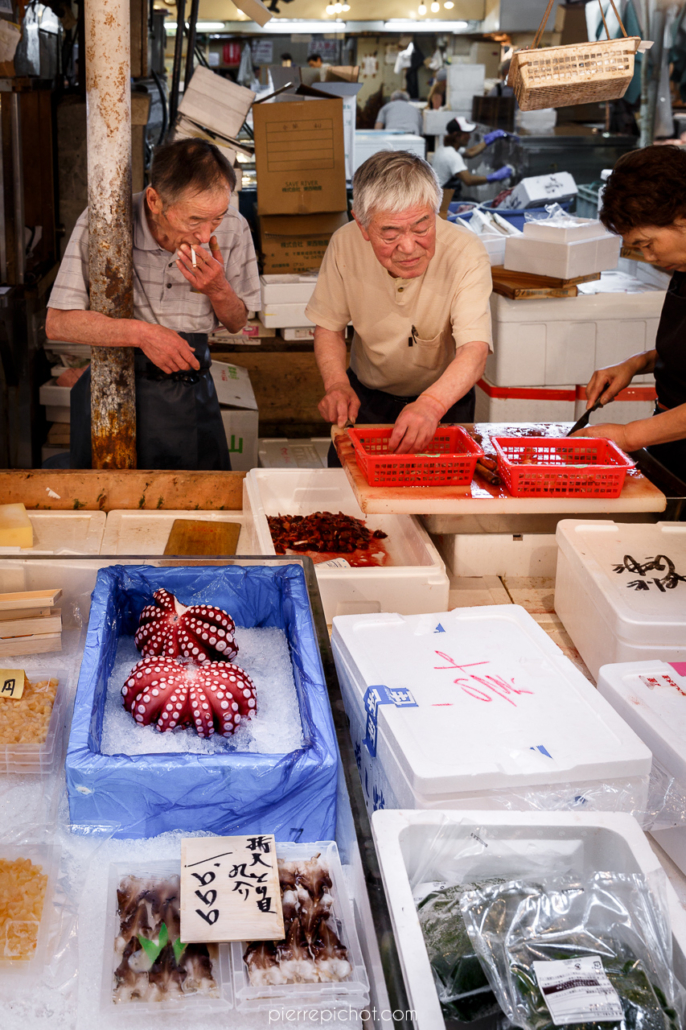 Put your camera down